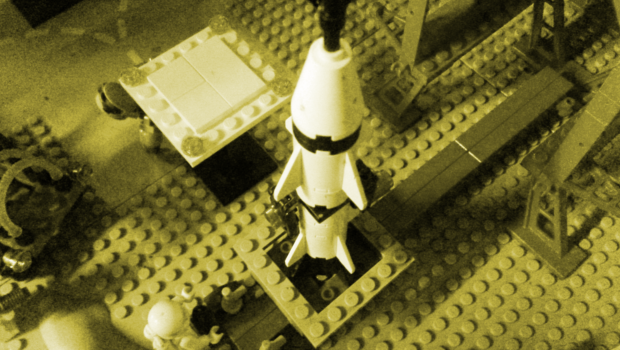 The “nuclear missile” photographed in PBR’s military base, Area-42

Contradicting reports that first emerged from war-torn PBR, the Ministry of Information said today that a claim made by the PBR that it possesses nuclear weapons was “idiotic” and only surpassed in idiocy by those minifigs who believed it.

The ministry highlighted LR’s supposed “leading light” Marie Bricks as a prime example of a “hysterical femfig whipping up hysteria around the world through nothing but her own ignorance.”

The statement issued by the ministry pointed to the fact that no nuclear reactors exist within the PBR or indeed anywhere outside the Empire. Furthermore it added that enriching plates was beyond the capabilities of the PBR and third world countries such as the LR.”

Speaking to the Minifig Times, renowned nuclear physicist Piers Threadgold argued “the ministry’s assessment [of the PBR] is likely accurate.”

“From the few photos we have seen all we can deduce is that the missile in Area-42 appears to all intents and purposes to be a conventional medium range missile. As no nuclear reactor have ever been observed or documented in the PBR we can assume none exists. These installations are large, not something you can exactly hide in a farm outhouse or on a 32×32 stud baseplate.”

Commentating on the Empire’s own nuclear programme Threadgold claimed that a nuclear weapon-armed Davidium is still some way off.

“I understand plate enrichment at the Enatolia plant is being carried out but from what I hear Legoland is still 1-2 years away from being able to amass weapons grade materials,” he said.