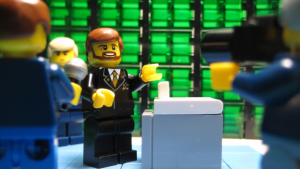 NBO leader Robert Goldman casts his vote at a polling station in Davidium yesterday. The official count has confirmed that the party has swept to power with 10 seats secured.

Robert Goldman is set to become Legoland’s third Prime Minister after seeing his party secure 10 of the 22 seats up for grabs in the Hall of Minifigs. Polls closed last night and the tallies were made available just before 7am this morning. The turnout was just over 60%. The NBO’s return to power, the Communists’ collapse and the first elected female figs were the defining news of the day.

Playing the stability card under a mantra of “low taxes and jobs for all,” the NBO hoovered up a significant portion of working and middle class votes in addition to their traditional upper class base. Business owners voted for them as the party of lower corporation taxes, middle class minifigs voted for them as the party of lower income taxes and the less well to-do voted for them for the promise of jobs. Their continuous opposition to the abolition of slavery also secured significant votes from the more well to do.

The Hall of Minifigs

The Davidium legislature consists of 22 elected Members of Parliament (MPs). To form a government the leading party must secure more seats than the combined number of seats held by the next two largest parties. A coalition of parties is permitted but is limited to a maximum of two political groupings. 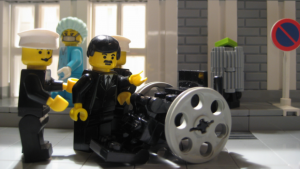 Former PM and EMU leader, Julian Haliday, failed in his attempt for re-election losing the constituency battle to the NBO’s Thomas Villiers and NIMB’s Philip Carter. Following the result, Mr Haliday announced his resignation from the party and retirement from politics.

On the left, the Communist Party saw their previous number of MPs more than half and were left as the joint fourth largest grouping with a paltry 2 seats. Much publicised accusations that the former CPL leadership were involved in the poisoning of the previous Prime Minister, Julian Haliday, were blamed by supporters for the collapse. The party meanwhile described the accusations as “an orchestrated smear campaign.”

Right wing party Not In My Baseplate landed 2 seats under a campaign policy against allowing continued inward migration of non-Towfigs into the cities.

Sole independent candidate Jesus failed in his bid to be re-elected to office and is understood to be upset at his father for not doing enough.

The new Hall of Minifigs will see the first ever female figs in office. In fact 4 of the 22 MPs will be femfigs albeit only one will form part of the NBO government. The EMU have by far the highest proportion of females to males at 2 out of 3.