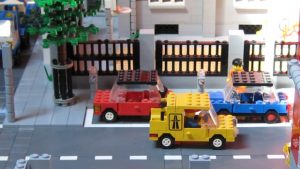 The Home Office has confirmed that a recent request by the Empire Police for the introduction of 6-stud wide police vehicles is being considered in a move that could see the country’s long-standing prohibition of such designs ended.

The Empire is the only known country in the minifigure world that has formally restricted the width of motor vehicles to 4-studs in width. Gas-guzzling 6-stud vehicles are however commonplace in many countries such as the Federation of Legopolis and the UPBR.

Any change to the status quo will need to be approved by government whose predecessors have historically shown no willingness to do. In 2014 designers working for the military sought approval for 6-wide transport trucks but their request was firmly rejected by the state at the time with “cultural preservation” cited.

The guarded 7-minifigure Council of the Empire is however an unknown entity so change could be on the cards.

Proponents of a change to legislation have claimed that the move would dramatically boost the car industry, in particular if the prohibition was lifted for civilian vehicles. The motor industry has backed these assertions with the largest automobile manufacturer Legoda calling the current restrictions “senseless”.

A decision on the matter is anticipated before Christmas.