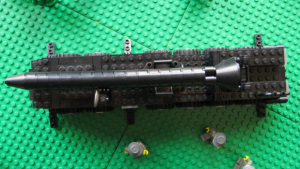 The government has denied comments made by Treedon’s president Victor Paulus that Legoland is developing nuclear weapons for use against the former Legoland province.

“Since Legoland’s humbling defeat at the hands of the great patriotic Treedon Liberation Army the Winter Palace has sought revenge. They believe their time is approaching and recognise weapons of mass destruction are the only way to crush our independence as our great minifigs in uniform are impossible to defeat by conventional means”. He finished the address to his supporters saying, “Treedon demands our neighbour immediately ends all research into such despicable weapons or face the consequences”.

The Legoland Minister for Defence, Mr Chemicalus Answerus, criticised Paulus’s remarks labelling them “inappropriate” and “spin”. Answerus told The Legoland Times that Paulus’s remarks were designed to deflect the attention of the Treedon public away from his private life which have come in to recent scrutiny after allegations of an affair with a female fig. “What we see here is clearly a desperate man with a desperate plan”, said Answerus.

The leader of Legoland’s ruling New Brick Order party, Mr Obnoxious Consensus, also refuted the suggestions that the state was developing the technology to make a nuclear bomb.

“Listen, we don’t even have a nuclear reactor to produce the required enriched uranium for a nuclear bomb so Mr Paulus is talking from where the brick don’t fit”. Consensus expressed his opinion that Treedon should never fear Legoland.

“We have no desire to ever invade Treedon, we are happy to co-exist with them”. When asked about the reasons behind the government’s recent massive increase in the military budget, Mr Consensus explained that the army was in need of a “complete overhaul and equipment revamp every few years”.

The massive increase in the number of enlisted minifigs was “to provide recent migrant figs with jobs”, he claimed.