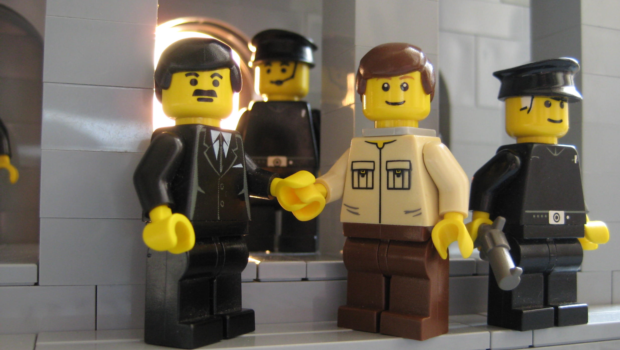 File Photo: Former President Brik photographed while on a state visit to the Empire in 2009.

Photographs have emerged that appear to show the former president of the PBR, William Brik, is alive. Images handed to the Minifig Times from an anonymous source close to the former government in the PBR show what appears to be the one-time leader hooded and surrounded by apparent members of a local “terror group” known as Cobra.

The news comes just hours after Fred Deeds declared himself president of the PBR following his ballot-box landslide win in a professionally rigged election.

In April, William Brik, the then PBR president, was believed to have died following the discovery of wreckage from his private 6673 Solo Trainer plane in seas off the PBR coast. No torso was ever found however.

Speculation is now rife in the volatile country that Brik’s disappearance from political life was spearheaded by Deeds and his efficacious deposing of opposition candidates Bob the King and Leslie Anne in the recent elections was all part of a grand plan at seizing power.

Political analyst Henry Atlas of the Emperor David University in Davidium explained to the Minifig Times some of the logic of conspiracy theorists. “Many of this persuasion believe that Deeds may have elicited Cobra to depose of Brik ahead of the election to enable the dismemberment by Deeds of Brik’s powerbase most notably his private paramilitary, Blackbrik. This theory carries some weight as Brik would have been a significantly trickier stumbling block for Deeds than both presidential rivals Leslie Anne and Bob the King”.

Meanwhile, under order from the Ministry of Truth, the Minifig Times has pulled the photographs from its online edition following the Ministry’s conclusion that the images were “inconclusive” and “not in the interests of the Empire”.

Although the Empire has no qualms working with rising tyrants, Deeds may not be the ordinary decent despot some have made out to be. Reports are now emanating from the PBR that the minifig is no fan of the Davidium regime or its foreign policies and the Ministry’s efforts at curtailing freedom of expression in the Legoland media may someday be regretted.