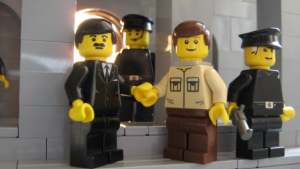 The PBR President photographed with former PM Obnoxious Consensus in a 2009 state visit to the Empire. The Presidents plane, a 6673 Solo Trainer, modified, built in 1990, was aging but considered a luxury in the developing nation.

President William Brik, leader of the PBR and steadfast ally of the Empire, is believed dead  following the grim discovery in the seas off the Republic of what is understood to be wreckage belonging to his personal plane.

According to local media sources, the President was flying to Davidium to attend the state tribute for the recently deceased emissary to the Capricas, Lord Reginald Groons.

Speculation is rife that the Caprican banana state may have attacked the President’s plane using a surface-to-air missile, possibly fired from an armoured fishing boat, doubling as a military vessel. If so, the act will no doubt be seen by the international minifig community as yet further provocation between the rogue state and the Axis Powers.