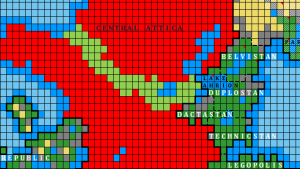 The newly conquered lands are shown in light green

The Imperial Army has seized a large swath of territory in Manchurin stretching from western Dactastan north westwards to the Greater Attica Sea.

Troops that had amassed in Duplostan moved west early Monday to secure the area of over 9,000 studs. In doing so the Imperial Army pronounced that the Empire has laid claim to all unclaimed lands north of the newly seized territory, in effect the entirety of unclaimed North Attica and much of Central Attica.

Political analysts have speculated that the Empire’s move may well be in response to a recent baseplate grab by both the PBR and Federation of Legopolis which have pushed their borders into South Attica. The Empire’s own expansion is therefore being viewed by such commentators as an attempt by Davidium to buffer itself from the expansionist policies of foreign countries.

Others have speculated that the expansion is simply a means to secure a new wave of much needed slaves with any native minifigs found in the region sold into the slave trade.

State television celebrated the news with presenters labelling the region as the colony of Manchurin. It announced that the Imperial Army is establishing a permanent military base and port settlement on the western coastline with a temporary runway and dock currently being built.

Analysts believe this will enable the Empire to project both its naval and air power further south should the need arise.