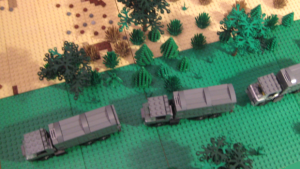 The Imperial Army convoy is amassed north of Lake Ahrion

Having entered Duplostan by crashing straight through the border barriers, the Imperial Army convoy that first entered Belvistan on Friday quickly exited the country on the main highway that connects Allapo and the Duplostan city of Shauman.

Ariel photographs issued by the Duplostan Aviation Authority show the convoy amassed on a remote area to the north of Lake Ahrion.

With no suggestion that the force is heading towards the capital, conquest through the decapitation of the Ham administration appears not to be the objective.

Uncertainty surrounding the intentions of Davidium however has caused panic in the region with the neighbouring states of Dactastan and Technicstan both declaring states of emergency. The Federation of Legopolis, whose northern border straddles Technicstan, is understood to be on high-alert and has deployed a warship to the Kings’ Gulf.

In Davidium the Emperor remained tight lipped explaining to reporters that he couldn’t talk about the situation due to a sore throat. 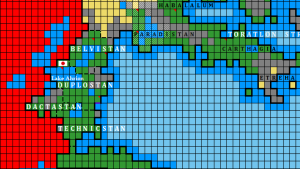 The troop movement has caused panic in the region.

Mounting international condemnation from major players in the region is adding tension to an already tense state of affairs. Former Foreign Office head, Fred Deeds, stoked the flames further speaking from his prison cell in Davidium.

“Someone should nuke LINC off the face of their baseplates”, he chortled.

Mr Deeds told reporters that he expects to be granted an Imperial pardon in the coming days and be back sipping red wine in his luxury mansion on the outskirts of Davidium by the weekend. Explaining how he knew, he added, “I spoke with the Emperor at length just a few moments ago and that’s what he said”.

He also had some thoughts on the PBR.

“I saw on PBR news that they’re building aircraft carriers with chainsaws. Things have really have gone downhill there.”

Renowned political analyst Henry Atlas warned that Legoland’s actions were “dangerous” and the perils were being exacerbated because of the wall of silence.

“When foreign states do not know our intentions it puts them all on edge. The cloak of secrecy has everyone wonderings what’s going on and fuels conspiracy theories”.