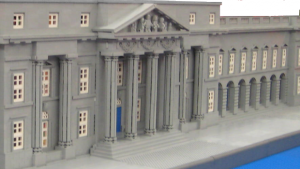 A tranche of new taxes have been announced by the Customs and Excise Office following the opening of the Davidium Custom House. Costing record sums the landmark building will need to be paid for and it is clear that it is the subjects of the Empire who will foot the bill.

With state coffers heading towards negative territory, new measures to increase revenues were required and the Customs and Excise Office has duly obliged.

A Stud Tax will be introduced in the Autumn to be payable by all non-government landowners. The tax is to be calculated on a fixed charge per stud where a stud supports bricks.

An excise tax of up to 70% will be levied on all imports from the PBR and Federation of Legopolis, a move intended to raise income and also protect domestic industry and agricultural producers from foreign competition.

A ‘Colour Tax’ on buildings constructed with non-desirable colours (eg red, blue, yellow), an ‘Origin Tax’ levied on non-yellow minifigs and a ‘Conformity Tax’ which will penalise imports of 6-wide vehicles that require remedial works to adhere to 4-wide regulations are also to be introduced by the year’s end.

On the streets of Davidium many minifigs complained that they are already overtaxed and there was palpable displeasure at the Customs House project for having incurred further hardship on ordinary figs.

“When will they realise that our bricks are already broken,” said one whilst another bemoaned the excise tax on imports.

“We need these imports to remain cheaper than what’s available here. We can’t afford the local prices for some produce. Look at the food shortages in Castleland,” he said.

It is believed that the Stud Tax is likely to lead to major opposition from wealthier minifigs and business owners who are likely to argue that it is a base tax on development.