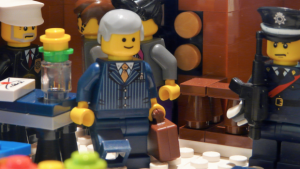 Despite looking distinctly happy, Fredrick Dover was apparently not.

The Federation of Legopolis Chief Minister Fredrick Dover has accused Legoland of state sponsored terrorism by granting political party status to Democracy NOW and allowing the party’s sole elected official take a seat in the Davidium parliament.  The accusations have been met with derision by the new Davidium administration and may irrevocably sour the relationship between the two governments.

Responding to the allegations, the Empire’s Foreign Minister, Fred Deeds, called on Dover to retract his statements and issue a full apology.

“We expect an unequivocal apology and a public acknowledgement that our government had nothing to do with Democracy NOW’s partaking in the elections here. As disagreeable as Democracy NOW’s policies are, I expect the Federation of Legopolis to fully accept that its home-grown group and the group in question here are not one and the same.”

Asked whether there would be consequences if a retraction was not forthcoming Deeds nodded and said, “They’ll be serious, and financial.”

Democracy NOW leader Oscar Casement reacted to the development by slamming the Legopolis regime which he labelled “tyrannical”.

“What we have seen today is the desperate act of a desperate state who should know a lot about state terrorism being the world’s global leader in that sphere. Minifigs in Legopolis should know now, if they didn’t before, that the tide is in their favour now and in the favour of democracy movements. Their time is near. We fully support our brothers there fighting a just cause.”

In their quest for improved minifig rights and free elections, Democracy NOW has been a thorn in the side of the both the Legoland and Legopolis regimes for a number of years. The group first emerged in the federation with their sister-group coming to light in Legoland last year in pro-democracy rallies. The group was never officially banned in Legoland but they were oppressed. This ended when prior to the 2017 election the Council of the Empire granted the group political party status. The party went on to field 4 candidates with one subsequently elected. Political commentators believe that the party was allowed partake solely to add legitimacy to the elections and because they were no longer deemed a threat to the establishment having little resources and time to mobilise support.

Speaking later to RTL, Prime Minister Robert Goldman said there was plenty of scope to settle the matter between Davidium and Legopolis and the governments should look to “work together.”

“We’ve significant shared interests and now a major opportunity to expand trade which will benefit both economies enormously. Look at the Lego Republic and what happens to those nations that isolate themselves from the global market.”

I am prepared to commence talks to open up the Empire’s domestic market for companies from Legopolis but we will of course seek a reciprocal arrangement based on a core foundation of good relations at government level. I am confident that the sensible Mr Dover will agree that we shouldn’t let a single insignificant elected official, who is no friend of mine, stand in the way of the potential financial rewards. Our representatives in Legopolis will be conveying this message on my behalf.”