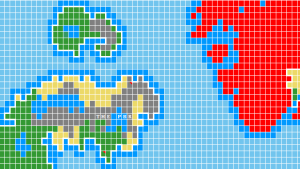 “Such developments would be a clear provocation to the powers that be in Davidium and in the other capitals in North Attica. We don’t seek confrontation but a baseplate grab is not up for discussion”.

Those were the stark words of Emperor David in a brief exchange with reporters before bodyguards pushed the media back.

The Emperor’s candid counsel is being interpreted as a clear warning to the administration in Williams City that the Empire and other regional powers will view any PBR expansion into the continent as a race to seize resources and intentionally threatening.

His comments came ahead of an important meeting between the military junta leadership headed by Gen Charles Amun and the Emperor and his advisers. The meeting is understood to concern the timetable for the transfer of special powers held by the Committee of National Restoration to the Emperor which is due to take place in August.

Those powers, which include directorship of the Imperial Army and the notorious Empire Police security force, were bestowed unto itself by the junta following the February 2014 coup d’état.

It is believed however that the junta no longer wishes its power to secede to the Emperor as planned arguing that for the foreseeable future it is best equipped with maintaining security amid a general flux and instability within the borders.

From previous public remarks Fort Sabre is expected to argue that the sting in the tail of internal strife should be placated through diplomacy rather than ratcheting up military operations, the current preferred path of the Committee of National Restoration. The Emperor appears to view the ever increasing ambitions of foreign so-called Lower-World ‘Grog’ powers as a menace worthy of prime attention.

Foreign Secretary Fred Deeds surprised many by breaking ranks with the junta for the first time to publicly confirm he shares the Emperor’s viewpoint on the matter. Speaking to NTL Deeds called the PBR “a rogue state headed by criminals who deal with criminal groups.” Deeds’ public support for the Emperor puts him at odds with his junta backers with some sources saying his position is now untenable.

Whether the PBR will heed the Emperor’s warning and shelve expansion plans remains to be seen with officials in the PBR capital not answering calls from the Minifig Times.