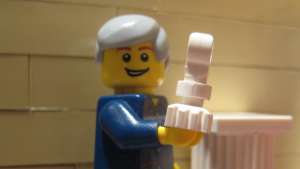 Deeds shows off his “most-prized possession”

The Ministry of Truth issued a brief press release today claiming that Fred Deeds is not a member of the military ruling party and recent reports appearing in the international press to the contrary were false.

The Ministry, the mouthpiece of the junta and indeed previous governments since 2010, appears to be distancing the regime from Deeds due to the latter’s unpopularity around the globe.

However BrikiLeaks, who maintain they are neutral conveyors of the actual truth, have labelled the Ministry an “instrument of unashamed state propaganda” and the statement should therefore be taken “which a bunch of studs”.

The text of the statement read, “the Ministry of Truth confirms that Mr Fred Deeds was, and is, not a member of the leadership of the Restoration or so-called ‘Inner Circle’.  The actions of Mr Deeds are therefore the actions of a freefig and not the actions of the legitimate government of the Empire of Legoland.”

Responding to the statement, Deeds told reporters at his home, “I never said I was part of the move [against the Hall of Minifigs]”. He asserted that links between him and the coup were “made-up” overseas by “the Western war jingoists”, namely the “PBR administration and its pawns, the Federation of Legopolis and Lego Republic”. 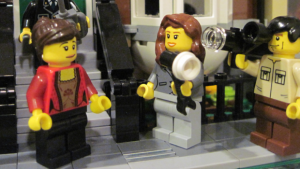 The governments of the three were firmly in the crosshairs of Fred Deeds who, in addition to a host of derogatory remarks, described them as “out to get me”.

Deeds finished taking questions by showing off his “most-prized possession”, the skeletal remains of a former FBA military officer’s severed leg, which he proudly displays in his living room mantelpiece.

“I look forward to having William Brik as close to me someday”, he remarked before wishing reporters a “safe trip home”.