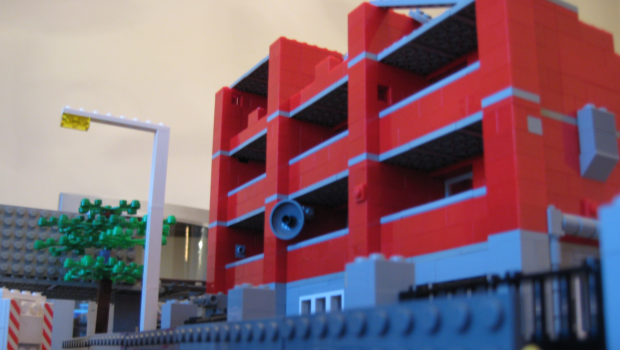 These high-density flats built in 2011 quickly came a home for drug addicts and drug dealers.

On the outskirts of Davidium a new sound travels through the air. The noise is the clicking together of bricks and plates as dozens of families work labouriously to resurrect rooves over their heads and build something resembling homes.

Limited to discarded parts, primarily illegally dumped waste from state construction projects, the constructs amount to extraordinarily poorly built units lacking even the most basic of public services.
Nonetheless finishing one’s own rickety shack is each and every minifigs’ goal here.

Speaking to the Minifig Times most explained that they were desperate at this stage and could not wait for the municipality to deliver on its promise to provide housing units to all when it was clear it could not.

Providing impetus to the haste at which the shelters are being built is the anticipated deterioration in weather conditions as the capital heads into another winter.

When asked for his views on the housing crisis Emperor David told reporters that things “aren’t as bad as they look”.

“Much is being done and more will be done,” he said before ending, “if you need more soundbites please contact the Ministry for Information.”

Prominent social commentator Julian Treetop meanwhile issued a stark warning stating that tackling the issue of homelessness was not an option.

“The disparity between the wealthy and those less fortunate has never been greater. The population explosion in the latter half of the last decade has exacerbated the real situation of diminishing resources for the average fig. A huge underbelly of impoverished minifigs now forms the basis of the Empire which at any time could rise up in anger”.

The Ministry for Government last month refuted such concerns explaining that the population is in fact in decline and the decline is projected to continue for at least a further year.

“The population of the Empire has been declining by approximately 50 minifigures a month since July 2015 and it is forecast that this trend will continue up until mid-next year. With fewer minifigures the Piece Per Capita ratio is increasing and minifigures are seeing the benefits. The real situation is that urban centres will need fewer housing units to cater for a reduced populace. History has shown that minifigures understand that Government knows best and do not revolt against improving situations.”

Public housing projects such as those constructed in 2011 and 2013 did have an impact on tackling the housing shortage but the high-density units have since been blamed for a spike in drug related crime. Whether the slums prove any better remains to be seen but their existence casts a shadow over recent government achievements.