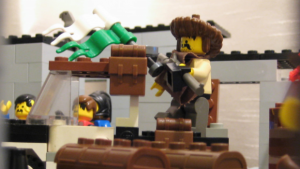 Militants loyal to the Grand Clergy swept into Bora Tigris

Legoban militants have seized the Basicstan-Belvistan border settlement of Bora Tigris after fighters overran the Alwana Gorge and moved to take the township uncontested. “The Dragon’s weakness is our strength!”, shouted machine-gun wielding Legoban militants as a convoy of refitted pickup trucks tore into the impoverished town.

Although no shots were fired, these developments in the Empire’s far-flung borders may signal the end of the albeit shaky cessation of fighting between the Davidium regime and the Legoban. In recent months general peace with the Legoban has been secured following the Empire’s agreement to relinquish control of a number of minor settlements in the Basicstan province including Hellenia and Abacus.

Under the Grand Clergy the Legoban has declared the establishment of “the Principate” in areas in which it has control and has established its own courts and policing system. It’s aim to return the Empire to the Castle-era is being implemented within the Principate with a return to serfdom and the feudal system. 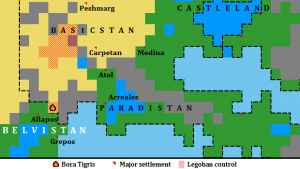 The news has caused concern in the Belvistan capital

Political analysts interpret the conquest as a test of the Davidium government’s appetite to reengage with their longtime adversary. Professor Issac Grain of the Emperor David University School of Political Science explained one possible scenario.

“Tensions have been mounting across the minifigure world following the replacement of the Legoland government in February and the perceived influence of former PBR President Fred Deeds. This coupled with the bubbling unrest in the recently annexed Paradistan province and Davidium’s desperate need to consolidate its power base the Caucus to eliminate any counter-coup attempt may stymie the regime. The junta may well therefore leave the Legoban be for now at least, until they get their house in order.”