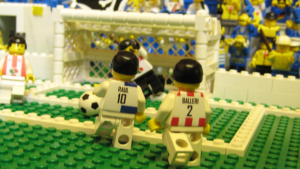 Serie A champions Legoland FC will be joined by Old Rule rivals Legoland United and Verdy in participating in next season’s Minifig Gold Cup. Victories for Verdy over Black Fortress Barbarians and Legoland United over Medalin White Sox were enough to secure the duo international competition places next term.

Verdy will place in Panterra Major’s most prestigious club cup competition after a 2-1 win over BFB at the Dark Stadium. The win dented the reigning Serie A champions chances of MGC qualification which were fully extinguished after Legoland United’s 2-0 vanquishing of Medalin.

At the bottom of the table, Louisville Minifigs and Millionaires joined Violets in being relegated to the second division. Louisville’s fate was sealed with a poor 2-0 loss to the already doomed Violets whilst Millionaires were put to the sword by the new champions, going down 3-1 at the Partizan.

Emperor Eagles, Robin Ravers and Archangel will replace the demoted trio after each secured a promotion spot in the Serie B division.