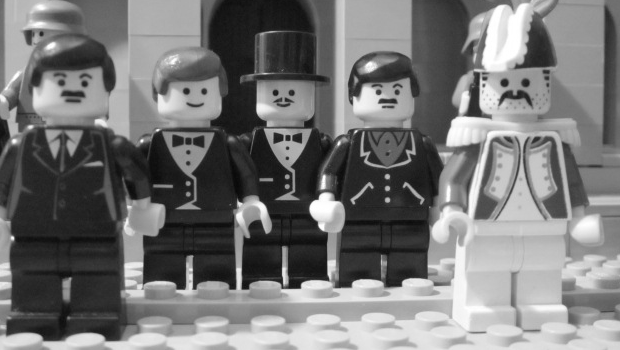 A minifig of the highest respect and veneration is no more. Shortly after 11:00 hours this morning the death of Sir Reginald Isaac Groons was announced by the Ministry of Truth. Suffering from the ill-effects of months of ill treatment at the hands of his Caprican tormentors, Groons’ body could take no more.  Doctors has confirmed that the minifig was suffering from internal haemorrhaging since his arrival home and had contracted Chronic Lego Chicken Disease.

Messages of condolences  have poured in from all across the Minifigure Union and beyond. Tripartite Axis members the PBR and Federation of Legopolis were quick to offer their sympathies to the Groons family and to the minifigs of the Empire of Legoland. A communique from the government of the Capricas was conspicuous from its absence.

As anger mounts against the Caprican banana state, the representatives of that foreign land in Legoland, Prince Christian and Princess Grace, are yet to mumble a response. Calls to have the two retrogrades paraded through the streets of Davidium to feel the public’s ire is supported by this news agency.

Federation of Legopolis national Chuck Charles has been made a Criminal of the Empire by the recently established Mind Police and could face the death penalty. Charles, has been convicted of malicious thinking and the double crime of publishing the thoughts. Stirring up trouble through the Federation’s unruly local newspaper opinion pieces, in his latest diatribe Charles attacked the Tripartite Pact for making the Federation “enemies of some nations simply because they are enemies of Legoland.” Extradition proceedings against the minifig are underway.