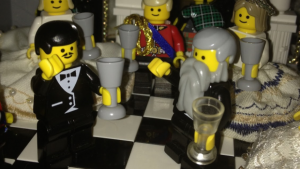 The Empire of Legoland’s first ever Hero of the Empire, Sir Reginald Isaac Groons, was tortured by nefarious agents of the Caprican state it has been exposed. Too ill to communicate in public, the Ministry of Truth confirmed Groons’ wish that it should speak on his behalf. The Ministry commented that Groons seemed to have much to share about his mistreatment but he was now sadly at death’s door and each further word was a struggle. It followed with a short statement.

A document apparently leaked to the Minifig Times from an anonymous source includes one report amongst many that Groons was “forced by his captors to continuously attend balls and other meaningless state functions with the sole aim of inflicting sleep deprivation and mental warfare” on the minifig. He was also apparently “force-fed Chicken Alexandria, until his inner studs were straining under the pressure”.

The news has sparked anti-Caprican protests outside the interim Caprican embassy in Inner-Davidium where Prince Christian and Princess Grace are currently holed-up. Security forces have however kept protestors at bay with rounds of tear gas reportedly fired.

The Ministry of Correction has announced the establishment of a new policing unit, the Mind Police, who will be tasked with ensuring the protection of the minds of minifigs within the Empire from sinister thoughts and ideologies of alien cultures. The Mind Police will further the consolidation of the Legoism culture under the existing Legoisation programme.