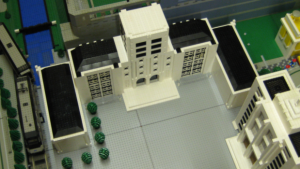 The installation did not go smoothly

The Emperor has congratulated the Linet construction firm for completing the installation of the Winter Palace into Legoland Square and overcoming the disastrous events of Saturday night which had thrown the entire project into doubt.

Major sections of the building collapsed during Friday’s attempted installation with the finger of blame pointed at Linet. The Emperor, however, called for calm now that the company had rectified the situation.

“I trust they have learned much from the process”, Emperor David said, adding, “calls for the execution of Chief Executive Officer Infamous Calculus are premature. Let’s give him another chance”.

Mr Calculus can breathe a sign of relief for now but he will have to ensure that the off-site construction and installation of the new parliament, likely to be either named the White House or the Hall of Minifigs, will go smoothly. The first off-site version was discovered to be too large to fit into Legoland Square and is to be torn down and rebuilt. Mr Calculus stated that his men will do a good job.

“We have studied carefully the flaws from the installation of the Winter Palace and are confident of a success for the parliament building”. Calculus also confirmed that Linet had checked “long and hard” to ensure that measurements taken to ensure the building will fit into its designated area are correct. “We won’t make any more blunders, don’t you worry”, said the CEO.

International reaction to Friday’s Palace collapse has come in with the Rulandstin election candidates seemingly eager to share their views and get into the media spotlight. PBR’s incumbent ruler, whose first-name The Legoland Times can now exclusively reveal is ‘Bob’, agreed with initial media reaction to Friday’s embarrassment that called for Mr Calculus’s head.

“Calculus’s execution would be a first step in fixing the problem”, he is understood to have commented. Other candidates also had their own views with Dr Jones expressing his sadness and promising that engineering support from PBR would be granted in the future if needed. Sources close to rival candidate Luke reported that he believes a committee should be formed to find the fault and hopes the loss of Minifig life did not occur while candidate Jar-Jar was quoted as saying “Mesa thinks it’s pretty”.

Meanwhile Colonel Brik, PBR’s diplomat to Legoland, believes the “minifigs of Legoland will overcome this setback, find a solution and build a grand Winter Palace in the near future”. He went on to say the engineers who solved the Hurricane issues PBR is plagued with are “ready to send design support to Legoland”.