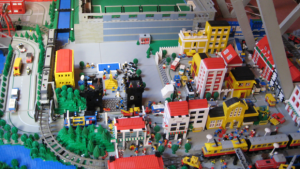 The mess has left a gaping hole in the city

Directors and project managers at construction firm Linet have been left embarrassed after what was supposed to be a historic Saturday night for Legoland City turned into a complete shambles.

In perhaps the biggest disaster in the history of the Legoland construction industry, the capital’s to-be largest – and arguably most impressive – building, the rebuilt Winter Palace, collapsed during its installation into Legoland Square.

The massive building, designed in the neo-classical style, was constructed off-site and the sheer size and weight of the building is being blamed by Linet for its collapse.

Public Relations spokesperson for the firm, Mr Prosperous Prickus, tried in vain to provide an excuse.

“We had to try and move the Palace, which spreads over three green baseplates, onto the square’s 2 grey baseplates. We experienced a number of problems due to the sheer weight and length of the palace and due to a poor surface underneath the square’s grey baseplates. This surface is soft and resulted in cracks following the move and when workers tried to rectify the situation walls started to fall off”, he said.

The media, however, are having none of it and have laid the blame for the mess firmly at the door of Linet.

In an odd twist of fate, Linet are owned by the Emperor himself and it he is understood to be furious at the collapse of his future city residence.

The Castle Clan newspaper has called for the execution of Linet CEO Infamous Calculus in an editorial entitled “Blundering bafoons in suits cause city havoc”. The UASL Gobal is even more critical stating that “Linet’s reputation is now destroyed and deservedly so”. It accuses Mr Prosperous Prickus of “big-time lying” and claims it has proof that the building started to collapse the minute the firm attempted to shift it from the green baseplates”.