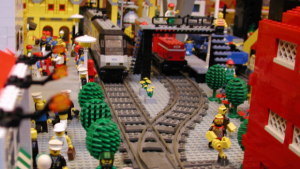 The Legoland economy is on the brink of entering a period of recession according to the State Economic Bureau. In a stark report the Bureau concluded that the boom times of 2006 have all but ended as a result of the Government’s decision to cease expenditure on new Lego imports. The Bureau also warned that a continued lack of management of the economy by the Government could push growth into negative numbers and kick-start a recession.

The Bureau concluded that overall growth for April ’07, March ’07 and February ’07 was 0%. According to analyst Mr Numberus Puncherus the trend is very worrying for the nation. “It is clear that the Government appears to have ran out of funds and typically when this happens the construction industry stalls. Unfortunately it has been the construction industry which has led the economic boom for the previous 9 or so months”.

Puncherus also added that nearly 70% of the population in the Legoland Republic are living below the poverty line. Issues such as the lack of housing and homelessness are a major problem he added and he warned that this fact could allow extremist political groups capitalise on growing discontent with the Government.

“The decision by the Central Government to tighten their belts is causing the average Legoman in the street alot of hardship which can only benefit groups such as the UASL Fascist Party” he said.

Meanwhile, the Government have announced that there will be no money to spend on new Lego imports for April and “possibly up to June”. Speaking to the media, politician Biggus Retardus claimed that the Government of Legoland owe nothing to anyone and have been doing a “great job”.