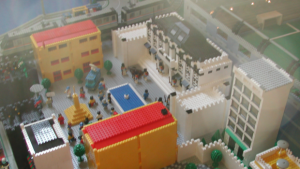 Three massive car bombs have exploded in Legoland City this evening with reports of major damage to a number of key Government buildings and at least 18 people killed.

The blasts could be heard outside the city and smoke has been bellowing from the blast sites for the last few hours. Rescue services are at the scene but communications have been hit severely as one of the three bombs severely damaged the city’s main telephone exchange.

Fire crew at the Ministry of Defence building in the city centre say up to 11 people are feared trapped inside the burning shell.

Initial reports from the Empire Police are that the attacks were highly sophisticated and were primarily aimed at the Winter Palace and military governmental departments.

No group has yet claimed responsibility for the brazen attacks however the media do not believe crime gang the Hole Heads have the expertise to carry out such attacks and so attention has fallen on the state Playmobil and the outlawed far-right group, the UASL Fascist Party.