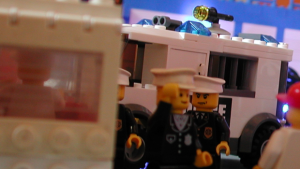 Police have cautioned citizens to “be vigilant”

The outlawed terrorist group the Anti Vikingland Eland Korp (AVEK) have today denied that they were responsible for Friday’s triple car bomb attack on Legoland City. The blasts targeted the Winter Palace, the Ministry of Defence, and the city’s telephone exchange.

The AVEK, who are a paramilitary wing associated with the UASL Fascist Party, announced in a statement issued to The Legoland Times that they had absolutely no involvement in the attacks, attacks which they labelled “against the interests of Legolanders”.

Speculation is rife as to who could have carried out the attacks which have now claimed at least 23 lives including 8 policemen.

After the Intelligence Department confirmed its opinion that foreign involvement was unlikely, the national press is focusing blame firmly on one of city’s top three organised crime gangs: the Legoland Mafia, the Hole Heads clan and the Shaven Heads gang.

The Hole Heads have been singled out in particular following their “declaration of war” on the Legoland state which was made last year following the government’s decision to bulldoze the Dalam slums.