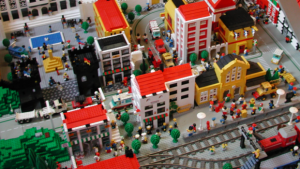 “Home-grown” attackers have been blamed

The fact that no group has yet claimed responsibility for Friday’s bomb attacks in Legoland City has increased tension amongst the city’s residents in what would already have been a tense time as Sunday’s highly anticipated Legoland Derby football match approaches.

The national Intelligence Department’s belief that the attackers are “home grown” has stoked people’s fears even more, with the capital’s empty streets now looking more like those of a ghost-town as shoppers and workers alike stay indoors only venturing out when absolutely necessary.

Emperor David, speaking in an interview on NTL television last night, called for calm ahead of what is expected to be a violent week ahead. He assured the public that “everything that can be done is being done” and additional police and security forces have been drafted in from all corners of the Republic to both hunt for the bombers and to protect the public from football hooligans.

The Hole Heads clan remain the media’s prime suspects in the bombings although according to security analysts the police authorities did not believe that the crime syndicate had the knowledge and sophistication to carry out such an attack.