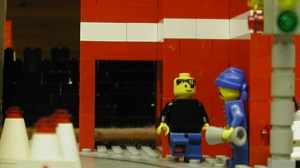 Alcoholic consumption is common on the street

Guinness Legoland has hit out at reports today in the national media which claimed that the company is encouraging drunkenness amongst Legomen and causing a resulting surge in the number of alcoholics and alcohol related violence.

The brewery, which is in the middle of a major restructuring programme, said that alcoholic drinks are fine in moderation, and being drunk once in a while is “no big deal”.

However, according to Ms Roberta de Dryus of the Anti Drink Association, Guinness Legoland are being very irresponsible in their attitude to a “serious” problem.

“We are looking for the company to stop advertising Guinness as a means of getting completely wasted out of your head in the quickest way possible” she said.

According to statistics provided by the ADA, the number of alcoholic related violence is growing at an alarming rate and is blamed for 30% of all civil unrest. Guinness Legoland are the sole supplier of alcohol to the Legoland market.

Guinness Legoland this evening refuted the claims by the ADA that it is encouraging people being “completely wasted” and said that there is an optimum level of “wasted-ness”, normally after about 8 pints.