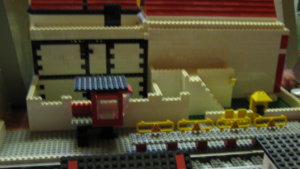 The walls should provide added security

The Central Bank of Legoland and the Legoland Football Association are celebrating today after their buildings were both fitted with back walls and even back doors.

According to Luigi Retardus of the Central Bank , the back walls have “dramatically increased security” and “this was the reason we wanted them”. The bank was a target for robbers on 12th January this year, however the attempted hoist was deemed a failure.

At the neighbouring LFA Head Office, Mr Fifa said that he was impressed with the new wall, however some more work needed to be done. “I am delighted at the back wall I must say” he said. He continued, “the great thing about this is that now we don’t have to look at the trains thundering by, however some work still needs to be done on the roof”.

The LFA, like the Central Bank, have had recent security problems with one of the front doors of its Head Office having been robbed, reportedly by fans of one of Legoland FC. “You know, we have no intention of replacing the door” Mr Fifa added. “We are awaiting the discovery of the stolen door and only then will we have two front doors”.

Construction firm, Ciaran The Kippy Builder, carried out the building works which was their first project in Legoland following the weekend lifting of a ban previously imposed on the firm for poor consultancy advice in the 1990s.