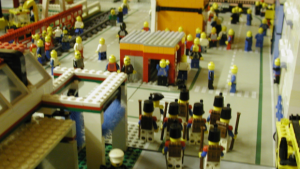 The arrival of troops has worried slum dwellers

Troops are beginning to gather on the borders of the sprawling Dalam slum in East Legoland City as a decision on whether to reintroduce slavery is expected later tomorrow.

If the Government decide to sanction the reinstatement, many residents of slums throughout the capital risk being captured and forced into slavery.

The appearance of Government forces on the outskirts of Dalam has stoked up the fears of many of the slum’s inhabitants.

The residents, many of which are refugees from rural Castleland communities, said they would not be taken against their will without a fight. It is this expected trouble that has lead to increased tension in the suburb and in other poorer suburbs of the city such as Marino.

A spokesman for the Government played down the presence of the soldiers in Dalam claiming that they were simply there to protect the interests of the Octan corporation and the upcoming debate on slavery reintroduction had nothing to do with this development.

Although the petroleum company does have its main facility near Dalam, this explanation is being branded as a “lie” by the Legoland Communist Party who currently oppose using slaves to speed up the nation’s expansion.

The LCP accused the Government of planning to abuse the poorest in Legoland society to benefit the wealthy.