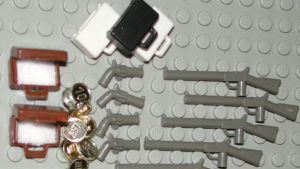 Legoland Police are celebrating a major coup tonight with the apprehension of two suspected key members of the illegal Hole Heads gang after being tipped off by a unnamed source.

Police are claiming that the two criminals were involved in Wednesday’s slaying of three police officers in the South Eastern part of the city. The trio were gunned down execution-style after an ambush by at least 3 Hole Heads.

The arrests of the duo and the capture of a large drugs and weapons haul is a major breakthrough in the government’s attempts at reigning in the clan’s activities in Legoland City. The drugs are believed to have been smuggled in from Gardinia with the guns having been manufactured in ND Land.

Four suitcases packed with cocaine were seized in the raid and, according to the authorities, together the drugs have an estimated street value of over £300,000. The cache displayed to the press also included significant quantities of cash and counterfeit notes which were “in the process of manufacture”.

The two arrested men will appear in court on Sunday.