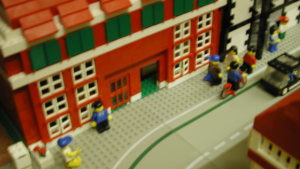 The Legoland Football Association has admitted tonight that one of the front doors of its Head Office in Legoland City has been stolen.

The LFA announced that it believes supporters of Legoland FC took the door off its hinges and ran away with it.

The LFA had earlier today announced that Legoland FC would be fined for previous crowd trouble by its supporters. This latest incident may well cause the association to punish the Blues further.