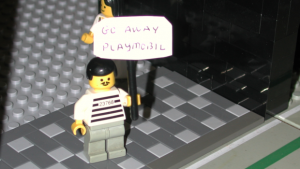 The Government has called today’s protest against Playmobil’s threat of war a “resounding success”.

Calling the protest a “mass expression of Lego people’s views”, a spokesman for the Government denied that a single man who turned up with a placard in Legoland Square wasn’t representing a mass expression.

The Government also denied that the single individual who did turn up was a temporary prisoner ordered by the police to stand in the square against his freewill and participate in a protest.