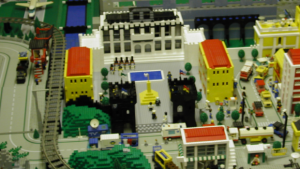 The Winter Palace was built “fast” thanks to slaves

The Emperor has broken his weekend promise not to legalise slavery by announcing to the world tonight that Legoland has indeed legalised the practice.

The news will be felt most by the former slum dwellers of Dalam and those of Castleland who may now find themselves sought after by the Emperor’s forces.

The Emperor’s decision will also be seen as a direct rebuttal of the Playmobil leader, President Bouwers, who threatened to declare war on Legoland should it go ahead with reintroducing the slave trade.

The Emperor stated that “Bouwers and his ilk won’t be allowed to buy slaves” so they should be able “to live with themselves”.

According to The Legoland Times, Government troops are building up to launch massive raids into Castleland next weekend with the expectation of capturing dozens, if not hundreds, of prisoners to work on Government projects including the aqueduct and taming of Lego River.

On Saturday, the army bulldozed Dalam to the ground destroying every single house and shop and forcing a stream of refugee bums to flee to Castleland where local warlords have promised safety. It is believed however that the warlords won’t stand up to the central government should they come knocking on their doors, and the bums may have now, already, found themselves trapped.

One side effect of the weekend attack on Dalam was the total decimation of much of the nation’s mafia heartland. As a result, the notorious Hole Heads gang announced on Monday evening that they have declared “all out war” on the Legoland state. It shall remain to be seen whether the threat of the Playmobil Republic, or of this Lego organised crime gang, turns out to be a bigger torn in the Government’s side.