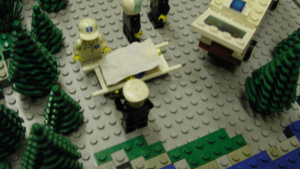 The victim is understood to be of Castleland origin

The body of a man was found tonight in Legoland Bay with police sources saying that the condition of the man’s body shows all signs of the man having been murdered.

The apparent killing has already been linked to a feud involving two Lego gangs, the Shaven Heads and the Hole Heads.

According to the Empire Police, the two clans are waging a low-scale war with drive-by shootings and homemade bomb attacks occurring frequently in the gangs’ strongholds in Dalam and Cante.

The body itself was found under the July Bridge by trawlers operating from Legoland Port and it is believed that the man is a Castlelander.

There have been calls in recent days from both the Legoland First and Legoland Socialists political parties to clamp down on organised crime and this killing will no doubt be putting pressure on the Government to get tough with the criminal overlords.