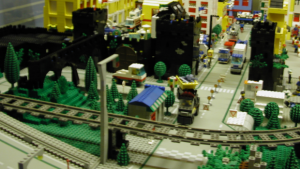 The gang is involved in a turf-war on the streets

Notorious Legoland City gang, the Hole Heads, tonight claimed responsibility for the killing of an alleged informer earlier this week.

The body of the dead man was found by fishermen in the city’s bay. Police confirmed he had been killed execution style, with a single bullet to the head, before being apparently dumped into the sea from the Castleland Link Bridge.

The Hole Heads, a mafia-like gang based in the Eastern quarter of Legoland City, contacted the police directly to state that that the man killed was “suspected of being an agent of the Shaven Heads”. The Shaven Heads are a principal rival of the Hole Heads in the city’s criminal underworld.

According to Police sources the two clans are fighting a turf war over the sole right to sell crack cocaine and other hard drugs in certain neighbourhoods in Legoland. The feud is being blamed for a number of murders already this month and Police admitted that they were concerned that there might be retaliatory attacks from the Shaven Heads in the coming days.

Meanwhile the Government has pledged to increase funding to fight organised crime. The parliament is expected to announce the formation of a special armed police force specifically designed to counter the increasing threat posed by the Lego gangs.