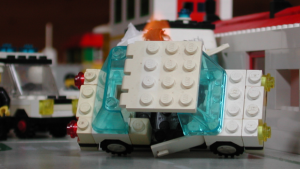 A Legoda car burns in Marino

Another weekend of football violence involving supporters of Legoland FC has marred what has been a very significant day in the race for this season’s Serie A title. Disturbances broke out in Marino ahead of top of the table Roma’s meeting with second place Legoland FC.

Much property has reportedly been damaged however there are no reports as yet of any injuries. Residents on Marino Street stated that LFC fans passing through the town overturned and tourched a parked car whilst chanting anti-LFA chants and throwing beer cans at shop windows.

The Legoland Football Association are expected to meet later next week to discuss recent crowd trouble in the league and decide whether sanctions should be imposed on teams whose fans participate in hooliganism.

Meanwhile at the Partizan, the biggest crowd of the season so far witnessed a tense match between the two sides. LFC started the brighter and in the first half came close to taking the lead through both Romario and Denilson. Roma had a single chance before the break, Francesco Totti’s powerful shot finger-tipped away by the Blue’s keeper Francesco Toldo.

The second half sprung to life in the 77th minute when out of nothing Roma’s Ronaldo was headbutted by LFC’s Gianluca Zambrotta in the box and the referee awarded a penalty. Ronaldo stood up and took the penalty himself beating Toldo to make it 1-0 to the visiters. Roma managed to hold on to claim the victory, a win that sees them move 4 points clear of both LFC and the Footballing Celebs.

The Celebs, champions in 2001/2 and 2002/3, defeated crisis hit Legoland United 2-1 and have moved into 2nd place ahead of LFC on goal difference. Lion Lakers’ 1-1 draw with Republic sees the Castleland side move into fourth place. Next week’s derby clash between Lion Lakers and Roma at the Olimpico stadium promises to be another top tie.