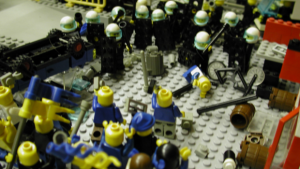 Massive rioting has broken out throughout south Legoland City this evening after supporters of Legoland FC began overturning cars and smashing in windows of houses and businesses in the area.

The violence commenced following the the football club’s scoreless draw with Marino in Round 10 of this season’s SuperLeague. The result saw LFC slip to second place in the league with Roma going top.

Reports from the south city suggest that dozens of people, mostly innocent bystanders, have been injured and some seriously. There are unconfirmed reports that a supporter of Legoland United, LFC’s bitter rivals, has been stabbed to death.

The majority of the injured are being ferried to Saint Mary’s Hospital in Legoland Town and staff at the hospital have said that they have run out of free beds.

The police have confirmed 27 arrests so far however the street fighting is showing no signs of ending and indeed appears to be worsening as the police push the troublemakers further back from the city centre and into the working class suburb of Cante.

Spokesperson for the Empire Police, Biggus Piggus told reporters that the riots appeared to be organised.

“There is some evidence to suggest that the hooligans came to the today’s league game with the intention of causing trouble no matter what the final score was. The weapons that are being used to attack my men and innocent civilians include hammers, crow-bars and even a hatchet. These weapons were not picked off trees”.