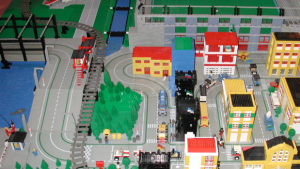 The June Motorway Bridge is to be replaced

The Government of Legoland in conjunction with the Export Company and the Linet building firms today announced the launch of project ‘Plan B21’. The ambitious construction project will see the replacement of the June Motorway Bridge with a new two-lane suspension bridge. The first lane was put in place today with the second due to be installed tomorrow following a Government sanction of purchase.

Additional railway line was also imported today however the track is not electrical and some Nature groups including Greenpeace have complained that the economic boom should not result the in authorities ignoring the need to protect nation’s environment. Legoland Rail who operate the railway network have however, and as expected, welcomed the aquisition of new track. A statement from the firm said that it was “imperative that the rail network ring for the capital be completed at all costs”.

Finally, work has also commenced on the revamping of ND Town. This part of the project includes the relocation of the Airoline airport further South.