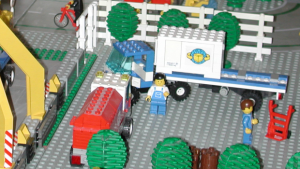 Expanding waistlines are not a problem for Legomen. That’s according to the latest findings of the Sarafield Research Group (SRG), a non-governmental body set-up to provide useless facts to the Legoland media for publication.

The study found that despite the typical Lego man and Lego woman’s daily diet consisting of high carbohydrate and fatty foods, obesity was not a problem they suffered.

According the the study, a Lego persons diet is confined to burgers, chips, pizzas, soft-drinks, beers, chocolate, fish, crisps, Kelloggs cornflakes, milk and cigarettes. The low choice of foodstuff available was a direct result of the large monopolies in the Legoland food industry SRG said.

Scientists are still studying the reasons why Legomen do not get fat however the severe famine currently being experienced nationwide may be one reason.