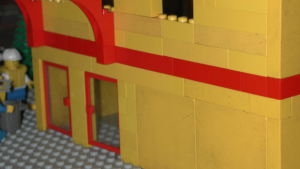 The new store template is intended to save money

A windowless branch of McDonald’s fast food restaurants has opened in Legoland Town aimed a thwarting local residents and visitors from “Donald-bashing”.

The phenomenon of Donald-bashing has seen numerous outlets of the restaurant chain seriously damaged over the years as rioters took advantage of the large window panes to test their footwear.

Mr McDonald, who owns the fast food chain spoke to reporters after the official opening by McDonald’s Legoland Ltd and said that in recent years profits at the firm were diminished due to the frequency of attacks on their windows.

“The cost of replacing these window panes is quite substantial when compared with the price of a steamed ham [hamburger]. We have also opened this store near the local police station for additional security”.

Some local passers-by interviewed spoke of their disappointment at the windowless McDonald’s. “For me it is a sad day as me and my mates often visited to kick in some windows especially after a trip to a football match ended in defeat for our team. It was a good way of relieving stress you know”.