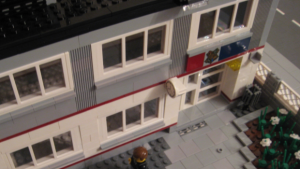 Emperor David has opened Davidium’s first ever school describing it as a “momentous day for the country” and an “image milestone for the regime”.

Visiting the school the minifig, swamped by children eager to see the renowned head of state in person, greeted all and sundry amid smiles aplenty. The Emperor praised the children for their inflexible short legs but flexible mind-sets when speaking to gathered parents.

“With their free-flowing ideas these great kids are the future!” he exclaimed. He went on to praise the amenities calling the playgrounds “a good distraction from studies.”

The school was partly funded by state coffers through the budget of the recently established Minifig Welfare Office but the project also received a significant donation from the Fred Deeds Children’s Charity. Fred Deeds was indeed present at the opening himself and called on other countries around the globe to follow in his and Legoland’s footsteps.

“The time has come for other countries to shift resources away from spending on ways to kill minifigs towards ways to improve the well-being of minifigs. What we have done here is frankly an embarrassment to all other foreign lands that do not have a single school to their name. These countries should know who they are, but in the event they don’t, they’re Legopolis, the Lego Republic and the PBR.”

It is understood that three 2×3 inverted slopes, together valued at over £5m, were used in the building’s reception roof and this fact drew some accusations that money had been wasted on superfluous luxury. Deeds was however having none of it and called such criticism a “red herring”.

“What’s going on here is that my personal detractors are attempting yet again to divert attention away from me and a good news story. Spending money on children and on infrastructure that delivers education is not wrong.” 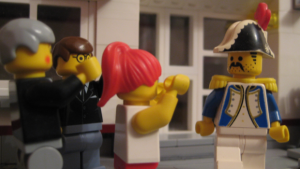 Back on the trail of the Emperor, questions were put to him about the recent return of Legopolis journalist and wanted on-the-run fugitive Chuck Charles and the PBR’s assertions that Cobra poses a threat to the Empire.

Responding to claims in Charles’ most recent opinion piece that the Emperor’s photographing skills were highly questionable, the Legoland ruler gave his reaction. “He’s an observant minifig, Chuck. The reality is however I’ve been a pretty busy fig of late, too busy in fact for my tripod.”

Commenting on Cobra the Emperor said that he had handed the dealing of this matter over to the Committee of National Restoration.

“I spoke briefly with General Charles Amun about Cobra and the Western Powers’ obsession with this so-called ‘terror threat’. We agreed that ‘terrorism’ and ‘terror’ is being bandied about all too easily in the West and how certain governments are responding to Cobra is not necessarily in the interests of the Empire. General Amun’s Committee will formulate an appropriate response in the coming days and he has my full backing.”