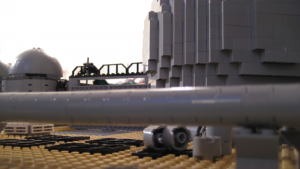 Scrambling to limit both damage to its reputation and economy, the president of the PBR, Bob King has denied his country is in the grip of a Megablok outbreak that has killed dozens of minifigs to date.

In an open-letter to the Lego Repubic’s Department of Health, who expressed serious concern following the reports in the Minifig Times of the disease’s emergence, President King was adamant that PBR was Megablok free and the reports were “in error”. It was also noted the leader was having problems with the Caps Lock key on his computer.

“At this time there is ZERO outbreak of Megablok in PBR and we would assume ZERO outbreaks in the Federation [of Legopolis],” he said.

The PBR ruler did however admit that Cobra, the military led de-facto state born out of the ashes of the 2013 civil war that ravaged the country, was in the possession of stockpiles of the virus and had the capability to deliver these using conventional rockets should conflict erupt between the two sides. Such a move, President King said, would likely lead to the mutual destruction of both parties.

In Legoland, the Foreign Office today reiterated its intention to keep in place the imports embargo on the PBR and on the Federation of Legopolis as a “precautionary measure” until proof is provided that the virus has not taken a hold in either jurisdiction.

The office stated that the move was not aggressive and was not made in response to deteriorating relations between the Davidium junta and the Western Powers.

“The Empire is not interested in starting a trade war or intentionally damaging any economy, in particular with fellow members of the Tripartite Axis. Legoland has warm relations with both Legopolis and the PBR and despite minor differences of opinion in some matters the relationship at the strategic and top-level is strong. We made the decision solely to protect the health and wellbeing of our own minifigs.”

According to the Minifig Times’ business editor, the embargo and communicated reason for the embargo will severely hit both countries but in particular the PBR.

“Since the war in 2013 the PBR has significantly increased its brick and plate manufacturing capacity however it needs an outlet to use these up. Its primary focus over the last year has been growing its domestic tourist industry and it was expanding at an impressive rate. A contagious virus such as Megablok ripping through the populace, whether real or a possibility, will however no doubt damage this sector enormously.”