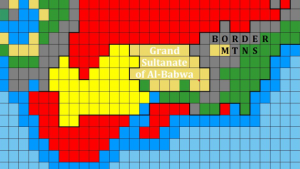 Federation gains are shown in yellow

As political calamity cloaks Davidium the Federation of Legopolis has moved swiftly to seize a large chunk of eastern Tyrrhellena and extend its borders right up to the newly established East PBR.

The development places further strains on relations between Legoland and the City of Legopolis with Davidium understood to view such territory annexations as an affront to its traditional regional hegemony.

It is widely thought that the summary ousting of the Junta by security forces loyal to the Emperor was carried out after the Junta’s failure to prevent territorial expansions in what is perceived as Legoland’s backyard.

There was no immediate response from Davidium following the news of the Federation of Legopolis baseplate gains but a response is believed imminent.