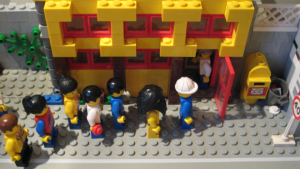 Despite claiming benefits Jesus has a smartphone

Previously angry minifigure Jesus Christ has told reporters that he has “forgiven” Chuck Charles after receiving a personal apology from the columnist via electronic mail. The self-proclaimed deity’s PC has since been taken away by the Empire Police for “robotic questioning”.

Waving a copy of the email, a grinning Jesus confirmed that the email was received “just before I went to bed”. This email he said, “proves I am relevant.”

“I was about to jump in and then my smartphone beeped. There it was, a clear apology from one of the world’s leading literary giants. I had a good night’s sleep thereafter.”

A copy of the email was shown to reporters. It read;

I’ve noticed that you’re a little upset at not being interviewed or consulted prior to being included in my last column. Very sorry about this. If there’s anything you’d like to say, please feel free to let me know. I’m more than willing to listen to your views and interview you.

Jesus explained that the words were all he needed to move on and put the whole “debacle” behind him.

“I was delighted to get the mail. I haven’t been receiving many emails for a couple of weeks now and was beginning to think the home internet wasn’t working. Good to know I have followers out there. I’ll be checking my Facebrick later to see if I’m added. I’m now looking forward to a prosperous future.”

Asked about the latest bad news emanating out of the PBR and Legopolis Jesus was caught somewhat unaware.

“No, I haven’t heard of this Mega virus thing, I can’t know everything you know. Whether it is a result of sinning is something they’ll have to ask themselves. Were they sinning? Probably.”