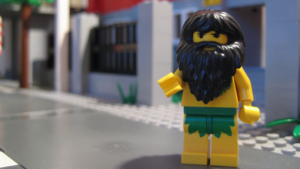 Scantly-clad Jesus is not impressed by Chuck

Self-proclaimed ‘Son of God’, Jesus, has criticised Legopolis columnist Chuck Charles after the latter wrote about the minifig’s woes in an overtly anti-Legoland piece published in the Minifig Journal.

Although describing the article as “an interesting read” the celebrity accused Charles of using him like a simple “pleb” to score political points over his adversaries. Charles, by doing this, was “practicing exploitation” and akin to “being a Roman.”

“Seeing my name there was quite annoying. It really annoyed me a lot. I wasn’t once asked to give an interview, to explain my views in front of a big TV audience. But did he ever come asking? Did I get a TV deal? He did not. I did not. I was treated like a good-for-nothing pleb.”

The minifig, who is enjoying a rare period not under house-arrest in his Abbas residence, cautioned Charles to change his ways.

“Chuck has to turn the other brick and highlight my positive, marketable side. This is the way one gets rewarded in the afterlife. I don’t like being used, I like being praised. He should think twice before doing stunts of this nature again or I’ll speak to my dad.”

Although a flop in the last general elections Jesus has not given up on running for a future seat in parliament should the quasi-democratic institution be reinstated.

“I consider myself a public servant whose focus is the common minifig. I’m not here to line my pockets so I’ll continue my work as an independent with the hope of someday being elected to the Hall of Minifigs.”

Meanwhile the Ministry for Information described Chuck Charles’ article as “flamboyant propaganda fabricated by a renowned international fugitive”. The Ministry denied Legoland had an image problem and called on the journalist to “correct the inaccuracies or face the consequences.”