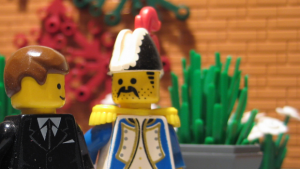 Political structures in Legoland are being shaken up

Emperor David has continued in his busy-body mode of late announcing that he alone has decided to restructure how the government will govern the country.

No comment has been heard from members of the military regime who appear patiently waiting for the Emperor to return to taking a back seat before sticking their necks out from the parapet.

In short, the 10 current ministries will be reduced to the 4 “core ministries”: the Ministry of Government, Development, Information and War.

Gone are the former ministries of the Interior, the Empire, External Affairs, Education and Science, Justice and Finance with the functions carried out by each amalgamated into the core ministries or just dropped altogether. The Ministry of Government, as the largest of the ministries, will encompass the Home Office, Foreign Office and Minifig Welfare Office. It is expected that the Ministry of Truth plaque will remain on the walls of the Ministry of Information for the foreseeable future.

Announcing the changes the as-usual candid Emperor explained that in his eyes Legoland has had “an image problem” in recent years and it’s been “harder to hoodwink foreign powers as a result”.

“When you call your Ministry of War the Ministry of Peace clever minifigs among us think something fishy is going on. To me more accurate names will raise fewer suspicions and make what we do and say seem more normal.”

Political analysts have commented that the move seems to be another “masterstroke” by the Emperor and one which the regime will probably support.

“Anything that reduces the spotlight being shone on the Empire at this current time is welcomed by the junta”, said Professor Issac Grain of the Emperor David University School of Political Science. “The junta, keenly aware that it is ill-prepared for any military conflict, is eager to shift the focus of the international community away from Legoland while it looks to rearm”.