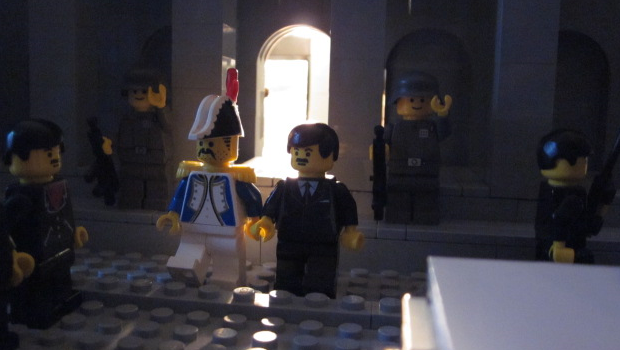 PM Julian Haliday is seriously ill in hospital tonight after collapsing at a State banquet in the capital this evening. The leader of the Effective Minifig Union was treated on the scene before being airlifted to the Davidium Imperial Hospital on the banks of the river Stem where his situation was described by doctors as “critical”.

Deputy PM and leader of the Communist Party, Marius Hanibal, said his coalition colleague was in fiery form at today’s talks on the PBR. “He was his usual self it seemed, promising bricks left, right and centre. Nothing out of the ordinary for this fig. We all wish him a speedy recovery”.

Doctor Boris Tume, Head of the Hosiptal’s Diagnostics Department said his team were as yet unsure as to what is affecting the Primer Minister’s health and that tests so far have proved inconclusive.

“We’re seeing Mr Haliday fall in an out of consciousness and what’s worrying us the most is early signs of respiratory failure. We have the best equipment in the country here though and the best medical minifigs on hand so figs should not be worried that Haliday won’t make a full recovery”.

Whilst Haliday is unable to function, leadership of the Government has fallen to Hanibal.