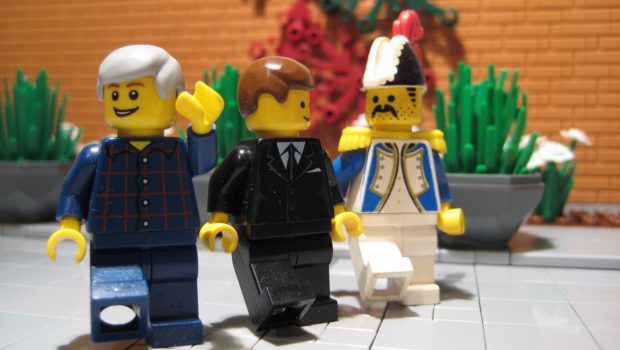 The former president of the PBR, Mr Fred Deeds, has arrived in Legoland where he has been granted asylum as part of the peace deal that ended the 7 Day War that gripped the foreign country earlier this month. The PBR registered ship carrying the high-profile minifig docked in Davidium Port just after 6 PM.

The minifig, suffering somewhat from a public relations and image problem back home, had no public order issues to contend with once on the Empire’s soil being warmly welcomed by both officials from the Ministry of External Affairs and the leadership of the Imperial Navy.

His arrival was met with some protests at the Hall of Minifigs with a number of back-benchers from the Communist Party and independents calling the figure a “war criminal” and a “Fleshy lover”.

War criminal or not, Mr Deeds was acompanied by the PBR’s first ever emissary to the Empire, Troy Allen. Mr Allen, a long-time friend of former president William Brik, is purported to be one of the PBR’s brightest lights. According to a press released issued by the PBR State, his background is in management and he graduated from Brikpublic University with a Masters in Brickology and Plate finding.

The Emperor personally met the minifigs at Brokers House and after some time together described the two newcomers as “true gents”.