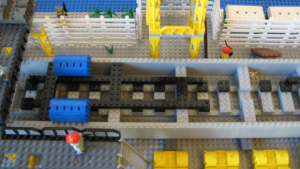 The battleship is one of 2 being built at the famous docks of Holtdam.

The Imperial Navy’s newest naval vessel is under construction in the port city of Holtdam with the first images emerging from the contractors showing building work on the massive hull. The new dreadnought is expected to be one of two such battleships that will secure the region’s waters.

The Ministry of Peace is over-viewing the build, and has acknowledged interest from the Federation of Legopolis in acquiring blueprints for the ship’s design. It is unclear whether the Empire will share military technology with the nation harbouring wanted criminalfig Chuck Charles.

Meanwhile, ongoing talks with the Capricas are edging closer to breakdown after the banana state threatened the Empire with a missile strike should it refuse to provide the country with much needed food aid. The Capricas are experiencing a massive famine after the ruling elite squandered the kinglet’s entire national budget of £90,000 on Clone military equipment.

The Empire has laughed off the threat.