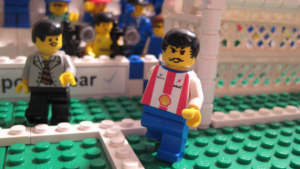 The LFA Cup final win is Verdy’s first ever title.

Verdy have landed their first honour after a nail-biting 2-1 win over Serie B side Medina at the Port Arena in Holtdam. The Serie A side, which finished the league season as runners-up to Legoland FC, took the lead in the game thanks to a goal from Mickael Essien in the 38th minute. The advantage was to only last minutes as Medina’s star performer this season, Freddy Adu, slammed home an unstoppable shot in the 42nd minute.

The Climbers retook control of the game 10 minutes into the second period when Yannis Tafer’s foul on Alvaro Negredo gave the Serie A side a freekick just outside the box. The free was duly converted with Neymar’s cross volleyed into the back of the net by Marouane Fellaini to the dispair of Medina ‘keeper Cristian Campestrini.

Despite Medina striking the bar in the 82nd and 88th minute through Matteo Paro and Daniele De Vezze, Verdy hung on to secure their fans and management cause to celebrate well into the night.

Verdy, who have already secured a Minifig Gold Cup spot through their league finish, may have provided either BFB or Medina the means to partake in next season’s tournament. The LFA are expected to lobby the MGC’s governing body for an automatic qualification place for the LFA Cup holders. A decision by the association is expected in July.