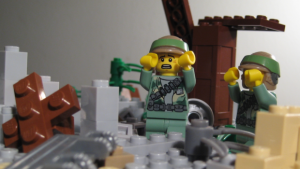 The Republic of Paradistan is no more. The Imperial Army of the Empire of Legoland have secured all major settlements in the country with the Ministry of Peace proclaiming a resounding victory on the backs on dead Paradistanian fighters.

Ministry of Truth reports from Wanbar indicate that the Imperial Army are being greeted by surrendering Paradistan soldiers when not by wishes of goodwill from local figs.

In the capital of Arecales, the flag of the Empire of Legoland was raised over the former national parliament. The streets of the city lie empty with one-time residents now in shackles.