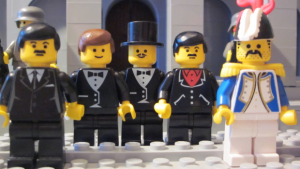 Minifig being tortured according to the Ministry of Truth

The Ministry of Truth has confirmed that the Empire’s emissary to the Capricas has been tortured by members of the ruthless security apparatus of Tsar Peter. He is now believed to be close to death.

The communique for the first time brought into the public domain the dark underbelly behind Tsar Peterâ€™s dictatorial control and has sparked an anti-Caprican demonstration in the capital, unprecedented in size and fervour.

Awarding Sir Reginald Isaac Groons a “Hero of the Empire” title in absentia, the Ministry praised the minifig for his loyalty to the Crown and his noble efforts at establishing amity and understanding between two divergent cultures.

“A minifigure of honour, of integrity, and of loyalty to the Emperor. Sir Reginald Isaac Groons has endured much these last few days and is close to passing. He is truly a fitting recipient of the Hero of the Empire”, it read.