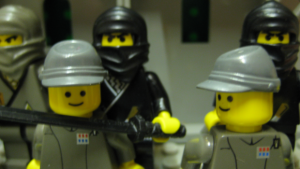 The group have demanded the unthinkable

The self-proclaimed Army of Lego Knights, Yeomen, & Enlightened Defenders against Annihilation (Al-Medahyin in the Classici tongue) have released a video tape of two members of the Legoland Republican Guard it says it captured on Saturday in an ambush on Legoland’s western border.

The previously unheard of group demanded that the Emperor of Legoland either overturn the September 2007 ban on religion in Legoland or face “total destruction in a holy war”.

This “war” the group claims will start “in earnest, God willing,” next Saturday with the execution of the captured soldiers should the government fail to legalise the worship of God.

Reaction to the developments has come quick with the Minister for the Interior, Mr Devious the Nucleus, calling the Al-Medahyin organisation “definitely not ordinary decent criminalfigs” despite admitting he “knew nothing about them before lunchtime today”.

The Nucleus, infamous for implementing state crackdowns on civil unrest, told reporters gathered outside the Winter Palace that having spoken to Emperor David, Legoland has “no intention of reverting the ban on non-existent God”. He quoted the Emperor as having said, “when one person suffers from a delusion it is called insanity. When many people suffer from a delusion it is called religion”.

It is believed that should Al-Medahyin carry out its threats, the full arm of the state military and police apparatus will be used to hunt down its members. Sources close to the government believe that the state is ill-prepared to fight another terrorist group as there it is already waging an unofficial war on various organised crime syndicates that is tying down resources.

On the streets of the capital, interviewed minifigs expressed their horror at the news. “This is the last thing we need”, said Trusty Puncherus. Friend, Shortus Consensus, commented that “most figs are for the ban, we don’t want these crazy fundamentalists”.